So this happened at the community garden this morning....


Dedicated to John Bailey, whose garden has many surprises.  :)
Special thanks to the Tia the Jindo Dog, props manager.

And if you like bloopers, we did have a wardrobe malfunction ... 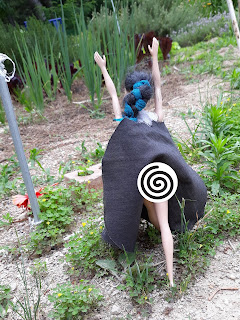 A lovely Korean woman and her boyfriend/husband came to the seaside cafe where I was hanging out with friends (Page 38 cafe and pension - between Odo-ri and Wolpo-ri). As they set up near us, I noticed that their tiny dog came with baggage, including a halter top and its own folding chair.  Now, Koreans with small, well-dressed dogs is not uncommon.  But this?  I could not stop staring at the hour-long photo shoot and utter neglect of the boyfriend/husband.  Here's photo proof; I can't make this up.  ;)

It's a fairly warm day in January: mid-40s (F), sunny blue sky, light wind.  Let's go to the beach, we said.  Run the dog around a bit.  See what's happening in the local villages.

We see some men fishing from shore.  A few young couples take selfies against the lovely blue water.  We see lots of seagulls, which makes our dog wild.

Finally, driving back home, we see that some folks have hung their laundry out to dry.  Next to the road.  And... we see what they're having for dinner.  :)

Tomato in a Tree

This June morning, I went up to putz around the community garden before the day's promised assault of heat.  First, though, I sat in the pergola and ate a choco muffin, looking around at the 10 plots filled with veggies and flowers.  As I did, my eye caught a red spot in a pine tree, about 10 feet above my garden.  Curious.  I inspected.  It looked like a plum tomato, but why would it be in a tree?  Only one garden is even growing a dwarf plum tomato plant this year, but those folks are in South Africa for the summer.  Maybe a roving child had illicitly picked a ripe fruit and then tossed it just so into the pines??  I looked again: no way it would have just landed there, balanced neatly on a branch.

I set about tidying the garden, still pondering the red orb glowing in the early sunlight. Maybe a squirrel had put it there?  Probably not: I've only seen one squirrel this year, and I just don't think they do a lot of storing tomatoes on a tree branch.  Ok, maybe a bird?  Well, the few birds we have around here are either way too small to carry a tomato or they would have just pecked it in situ.  Maybe...?

An hour later, I had given up finding a sensible answer to the mystery.  As a delightful distraction, however, a Eurasian jay landed on the fence; I held very still, pleased to see this skittish bird so close up.  Her more brightly-colored mate joined her a minute later, confirming that I was still undetected behind the gaillardias and daylilies.  After looking around the garden for a moment, the female swooped down with practiced ease to the plum tomato plant, and... yup.  She neatly plucked a ripe tomato and flew away with it into the pine forest, conclusively solving my mystery but perhaps beginning a new one for another curious human.

I went to the doctor with E today.  We had all the usual Korean hospital drama because (a) we can't understand the signs and (b) the looks of dread exchanged by the receptionists' faces when they saw us were pretty obvious.  But today's visit was EXTRA special: it had the added drama potential of being a gynecologist clinic.  Yay!

Before seeing a Korean doctor, even one who speaks fluent English, one is interviewed by his/her nurse-type person who never, ever speaks English.

Today's nurse believed that using a smartphone to translate sensitive questions for foreign patients is a good strategy.  Let me tell you something very clearly, dear reader: If you are at death's door in a foreign land and need phone translation to survive, just choose death and keep your dignity intact.

The nurse asked some basic questions by pointing to a laminated English cue card: name, age, etc. But as E's symptoms became more specific, the card options ran out and the nurse picked up her phone.  To call for a translator?  No: her hand snaked out from behind the computer to show us a question typed in Korean, followed by what she thought was an appropriate English translation.  Sensitive readers: you might not want to read further.  This gets awkward in a hurry.

E maturely decided to secretly read the questions in their original Korean while I craned my neck to read the English version and madly took notes.

PSER #3: "I'll see if there's something wrong with my uterus."  Wait: are we ALL checking our uteruses today?  Perhaps a "the more, the merrier" approach?

We were ushered out of the interview closet to a room where E got weighed next to a display of the parts of one's baby that could be bronzed.   Not bronzed baby SHOES, mind you:  baby parts.

As we waited for the doctor to who we'd been assigned (not actually the one with whom we'd made the appointment), we exchanged laughs at the way E's name was displayed on the monitor (no privacy in Korea, folks:  TINGAELRIS.  Yup.  Our family name first (part of it, anyway) and an awkward "Konglish" version of part of E's given name.

After 15 minutes, the nurse approached us with a final PSER: "I have a few waiters in section 2 so you can go to section 2."  I was confused about the reference to restaurant staff until E interpreted: there are fewer people waiting for the doctor in room 2, so we had been re-assigned.  And, as it happens, it was the fluent-English doctor with whom we'd made the appointment.   The doctor was great - just your normal gyno visit.  :)


The next day, friend Judy and I visited the local fields to watch farmers plant the rice seedlings, which are grown in local greenhouses.  (You may recall my earlier blog about rice harvesting.)   Judy did lots of chatting with the folks in Korean while I snuck pictures.

I got home and searched for instructions on the little container. Nothing in English. I took a picture of the Korean and asked my Google Translate app to help me out, like you do.  And I was horrified at what I learned:  Either Google is doing a TERRIBLE job at translation or Korean food manufacturers are far scarier than I thought...

Please note that this product may be injured by the jam of the surge arrester such as the one with the included product.

Please keep this product in the refrigerator for as long as possible. You can get a testicle or a reward for a legitimate consumer.