At the Beach (introducing some blue creatures) 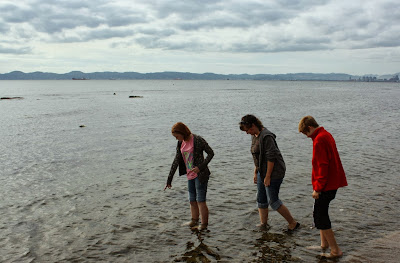 I get to the beach at least once a day. The closest one is a 5.5 minute drive away (slightly longer if you acknowledge the red lights and stop signs, but we're in rural Korea where there are no traffic cops, speed cameras are scarce and well-announced, and to stop at red lights would cause more accidents than not stopping), but many beaches are within 20 minutes of campus.  Some people walk or bike to the beach, but I have never been known for patience.  Or exercise.

I make it sound like there are dozens of discrete beaches, but it's all one coastline, of course. And it's all FREE public access! Well, ok, the military likes to throw some razor wire down in the bushes sometimes with signs that have a rather non-threatening mascot and lots of Korean we can't read anyway, so we treat the coast as IF it's all public.


Not all of the coast is beach, though - some is rocky, some is harbor, and some is sea-wall.  But every part is pretty interesting.

If our beaches have official names, I don't know them and couldn't easily read or remember them anyway, so we label them by what we've found or done there. So, we have sand dollar beach (the only place we find these crazy creatures), 4-point beach (for the giant concrete "jacks" that serve as a seawall), nautilus beach (where we found that rare octopus a few months ago), fireworks beach (where we sent some roman candles over the twilit water, bringing out an admiring raw fish restaurant owner), duck orgy beach (we don't know what got into those mallards), tiny shells beach, etc. Some beaches are particularly good for body-surfing (nautilus beach has big waves AND no pointy rocks, which is a plus for those with skin abrasion hysteria); others are good for finding particular items (sea glass; live crabs; ajeemas); and, finally, others are particularly nice for long walks, skipping stones, etc.  So why these daily beach trips?  I really love getting off-campus, getting some exercise that doesn't FEEL like exercise, and seeing so much sea and sky seems to calm my oft-frantic soul (who would have guessed I'd miss the giant Iowa sky?).  I also find these trips fulfill my inner packrat and I enjoy finding new creatures to learn more about.  Sam believes I look like a sandpiper, flitting and bending to check out some rock or shell before skittering on to examine the next bit of flotsam.

Which brings us back around (at LAST! say you linear, non-ADD readers) to some new creatures.

We've seen a beautiful (though rather lumpy) starfish living in happy groups next to the fishing pier (or sadly dying/drying/rotting atop said pier), but this weekend we were wading at "fireworks beach" and found these funny creatures right at our feet! I showed the kids how to pick them up (like I'm an expert - totally faking it, parent-style), and upon flipping them over we discovered their "everted" stomachs, which they hastily sucked back inside themselves. Sam and David were horrified by this behavior and refused to touch them. Nick was distracted by a seawall nest of giant earwigs (but took some great pictures and at least feigned fascination).


Back at home, some really outstanding research (thank you, google) showed that these leathery creatures are called "blue bat starfish" and are common in the East Sea (no one here calls it the Sea of Japan - too much bad blood between Korea and THAT empire).

The next day, at nautilus beach, we discovered some small, bright blue discs with hairy fringes - sort of like a sea anenome. A rigorous stint of (google) revealed these to be jellyfish!  To be precise, these are "blue button jellyfish" or, almost as much fun to say out loud, "porpita porpita."  However, these are not true jellies (I was feeling a wee bit jerked around by Google at this point): the center disk is one animal, and the tentacles are a colony of other little creatures that all work together. We didn't find any live ones, but I gathered some beached ones (ranging from pea-sized to a US nickel) to look at more closely; mine are missing most of their colony-tentacles, so if you want better pictures, go ask google.  :)
Now, if you know my habits, you might not be surprised that my love of the beach includes a fascination with the garbage that comes ashore (besides all the fishing nets and vast variety of bobbers, which we ignore as Standard Fisher Fare). Beaches with no garbage (in the city) don't hold my interest for long.

On our Always Found list are gloves, shoes, and lighters. It's a running joke that we can't leave the beach until we've found all 3 types of these items (which normally takes just a few minutes). Our Almost Always list includes toothbrushes and whole light bulbs (usually incandescent, but also fluorescent - never the CFL ones), in addition to water bottles, beer bottles, and red chili peppers.

Some unique finds are pictured here:


So, the daily beach is an admittedly quiet adventure, with a pretty indirect route for interacting with Korean culture.  But the October sea remains warm enough for wading and God provides new delights for the shy stone skippers and sand pipers among us.
No comments: