Dear Trevor (and others curious re. how South Koreans see the current political/military situation):

So much to say.  I shall limit myself, however, to a story about South Korea's annual Civil Defense Air Raid Drill (now in its 45th year; in Seoul they do this drill about 8 times per year).  My hope is that you will pick on some nuances that convey a great deal about current attitudes.

Now, this drill has been held since 1972. And citizens are encouraged to attend. I, as the mere wife of a foreigner, have not been educated about the time/date of such drills (not clear whether that's a university communication glitch or a marital one).  That said,  our kids' school does the drill faithfully.  Last year, however, the drill was aborted when the door to the underground air-raid shelter was locked .  And, maybe that's just as well!  Because access to said door was obstructed by a pile of old/broken university furniture.  Let us pause a moment here or reflection.  Last year, our campus shelter for 4000+ people was inaccessible for the announced, annual drill LET ALONE READY FOR ACTUAL BOMBS.

This year, I decided to take part with the kids' school.  I didn't know what to expect, so I asked google. The most information I could find for foreigners basically said, "when the sirens sound, follow Koreans."  (Ok, that's not quite fair; the best information was given in an adorable video made by a couple of tween Korean girls concerned about ignorant foreigners; they recommended a complicated shelter-seeking website that (a) is entirely in Korean and (b) has completely changed its layout since their filming so ... good luck, foreigners). Yup.

Ok.  So where's the shelter on campus?  No clue.  There are no signs.  Asking around led to information that the shelter was under my very office/classroom building!  Just a few minute walk from home.  Happily, a week ago I saw a laminated paper sign get taped up with arrow pointing downstairs.  The rest of the sign, like most things around here, was completely in Korean.  For all I knew, it was indicating the way to a faculty bar.

At 2pm on the designated Day to Practice Avoidance of Falling Bombs, a siren sounded (glad I was outside by the school already, as there were no other audible sirens on campus) and rapid Korean instructions issued from loudspeakers.

I asked around campus - long-timers mostly didn't bother doing the drill.  And people who were in the city at the tie said that no one was seeking shelter during the air raid drill.

So: do you get any sense that South Korea is freaking out about threats of war. Nope.  Neither do I.

Now, you should know right away that I splurged on a private room.  Judge me if you want, but wait just a moment until you know more.

(1) Korean hospitals speak Korean.  Which is totally their right to do so.  I, however, can really only speak English, Medical, and enough Spanish to get to the beach.  My Korean skills are reserved for entertaining two-year-olds.  Thus, communication with any other patients in a room, let alone their presumably nosy visitors, would be nigh unto exhausting.

(2) Sleeping and healing among a multitude of sick strangers really didn't appeal to Elisabeth.  Further, we did not know whether the non-private rooms (with 2, 4, or 8 beds) were gender-segregated, and sleeping with a bunch of men was right out.

(3) In Korea, overnight stays by family members are standard and thus each hospital bed has a pull-out cot underneath.  So, doing hospital math, a 4-bed room actually sleeps 8 people.  This compounded problem #1 and made problem #2 now apply to me.  Ah, no.  I didn't need men in the room OR scary ajummas.

(4) And, as I suspected, compared to US prices getting a private room was quite reasonable.  We paid the total bill when we checked out (I do love that feature): the private suite, CT scan,  x-rays, consultations with a doctor, blood draws, IV, and pain meds came to a total of.... About $400.  Judge me if you will.

We didn't get a diagnosis for Elisabeth's abdominal pain (it wasn't appendicitis but could have been diverticulusis/-itis).  Even so, you might be interested in some highlights via pictures.

Any questions you have?  Other adventures or places you'd like to see featured?  Happy to accommodate.  :) 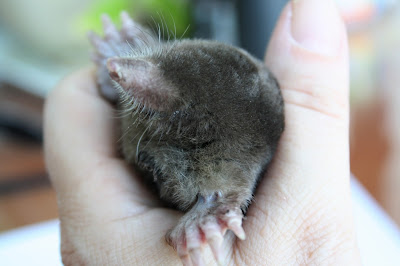 Apparently, it is NOT ok to ask your daughter’s visiting friend to touch your mole. Even if it’s a very cute mole.

So, remember the day I “saved” that beetle from its own foolishness?  Later that same day, I saw another animal in distress.  Here's how it happened.

David and I drove to the campus convenience store (yes, we drove because...he needed the driving practice?? it was hot out?) and along the way, in the right-hand gutter, scuttled a wee furry critter.  “A mole!” my brain registered just as we passed it.  “Back up!” I ordered hapless David, who was on an entirely different wavelength what with traffic and short-skirted pedestrians all about.  Being a good boy, he did as instructed, trusting my judgment.

I leapt from the van, a clutch of tissues in my hand, and (way too easily) swooped up our new friend.  I wanted to look at him – never having seen a mole up close – and intended to release him to a more suitable home than a plastic-guttered campus thoroughfare.

I hopped back into the van and commenced with close observations and amazing cooing sounds as David completed out brief journey to the store.  Oh, wait, I realized: I can’t bring this velvety joy inside the store.  Hmmm…aha!  I dumped the contents of the glove box (a fake-velvet-lined, little dark place) to create a cozy if temporary home for Mole.  I popped him (her?) and the tissues into the box and into the store we (David and I, not the mole) went.


Minutes later, laden with soda, ice cream, and some new novelty socks, we returned to the van and drove home, eager to show the family our new fuzzy friend (ok, I was eager; David was frankly horrified).  We parked, David grabbed the groceries, and I unlatched the glove compartment door, ready to (gently) seize Mole for our upstairs jaunt.

Oh….  Grabbing wasn’t necessary.  Mole was sleeping!  So soft and still.  I scooped him up and noted a bit of a wet stain on the floor of the box, near Mole’s chin.  Odd.  I dabbed at it briefly with tissues, then hurried upstairs to share the wonder of this rare creature.

Did I really think Mole was sleeping in my hands, after having run a mole-marathon down a hot summer tarmac, being grabbed up by a giant tissue claw, and stuffed into a heated box for 10 minutes?  Well, maybe.  Did I believe this even after Mole had released a goodly amount of fluid from his front end AND was no longer moving?  Well, maybe not.

Even so!  This little guy was a treasure to behold.  Marvelously soft fur, akin to the softest polar fleece; near-invisible eyes; and tiny pink baseball-mitt feet.


“Look!” I exclaimed to the household after bursting in. “Look what we found!” Surely this creature would be greeted with more enthusiasm than my ill-fated morning beetle!

I belatedly registered that Elisabeth’s friend Jenny was visiting.  But she’s an adventurous third-culture kid and so I immediately offered her, our guest, the first touch of my mole.  "Do you want to touch my mole?" In hindsight, I realize that she hadn't seen what was in my hands and had a rather different perspective on the situation.  I see now that she was rather concerned about the dubious honor of touching my mole, but she was a well-bred young lady and quite polite.  (After all, one must honor the principal's wife, even if the woman sounds crazy.)

“Um, sure?”  She hesitantly reached out her hand and I gladly proffered my handful of wonder, which she gingerly stroked with some confusion.

Elisabeth may never forgive me for embarrassing her.  David will never let me forget the day I killed a mole AND a beetle.  Nick just shakes his head.  Maybe I should stop rescuing animals.