Plants and Pots: Joy at the Nursery

Grace Lee has previously shown me the wonders of a Korean nursery, but today's was the best EVER.

Let's back up a bit.  If you wanted to buy cut flowers in our Korean city, I don't know where you'd go. We've looked and looked - there just aren't flower shops like what you'd find in the US, or bunches of flowers in the supermarket, etc. (On graduation day, hordes of vendors show up on campus to hawk gaudy bouquets, but I haven't found where those folks hide the rest of the year). Rather than flowers, Koreans buy and give plants. Nearly every apartment has a balcony (where one's washing machine and drying racks live) that is stuffed with beautifully potted plants. The pot and decorative toppings are as important as the plant itself, and this is an area where Western influences combined with Korean adoration of all things cute has had terrible tacky regrettable consequences (see here for photos of foam-formed animal inserts, grammatically-awkward sayings, and aggressively glossy plants that seem less like a gift than a bad joke).

Where were we?  Ah - in addition to potted plants, many nurseries make big money catering to funeral and grand open markets.  Which, upon re-reading, I see with my American eyes to be a rather strange and perhaps disturbing concept. So, to get even further off track, Koreans love big old floral displays (about 2m tall) for funerals, consisting mostly of white mums and plastic fan-like ferns and giant ribbons with a Korean or Chinese saying perhaps along the lines of "we're sorry your're dead." Koreans also use strikingly similar displays for new businesses (just substitute gerbera daisies and lilies for the mums, plus a presumably more cheerful banner).  Put those and a giant GRAND OPEN (not "grand opening") banner on the front of the store and you're in business.
I have clearly digressed and can't remember where I'm going with this.  At all.

Oh, yes. To buy flowers or flowering plants, one must locate a nursery (to buy plants for your vegetable garden, head for your local city sidewalk for excellent deals on tomato, squash, and pepper seedlings). Once one finally figures out what a Korean nursery looks like (think: run-down greenhouse-turned-storefront with a pots and plants haphazardly stacked out front and a 꽃 sign to signify flower or bloom), one begins to notice them everywhere.

ANYWAY. Grace took me to a new place today (introduced to her by our neighbor, the amazing landscape designer Mihae).  And it was heaven. Not a tacky animal, made-in-China pot, or gaudy ribbon anywhere.  Instead, we found hundreds of hand-thrown Korean pots with well-loved native plants and wildflowers casually  rustically artistically arranged floor-to-ceiling (I can't even convey with pictures the sense of "lovingly piled like a hippie hoarder"). Moss grew thickly on wooden surfaces and pretty much everywhere else; random plants grew from the ground where seeds and cuttings had dropped.  The whole place would fit in a racquetball court, but we spent a happy hour just wandering and exclaiming and discovering.

Now for the really cool thing about Korean nurseries.  You can bring your own flowerpot, pick out a plant, and they'll pot it for you - even if the plant you like is already in a nice pot and priced to go (you can also bring your own plant, buy a pot from them, and they'll pot it for you).  Happily, today's nursery owner had a particular talent for beautiful potting arrangements, was quite outgoing, and rather enjoyed teaching the professors about her style of potting plants (Grace was a great translator).

I shall certainly return, with friends and money.  I love her so much - and I don't even know her name.  :) 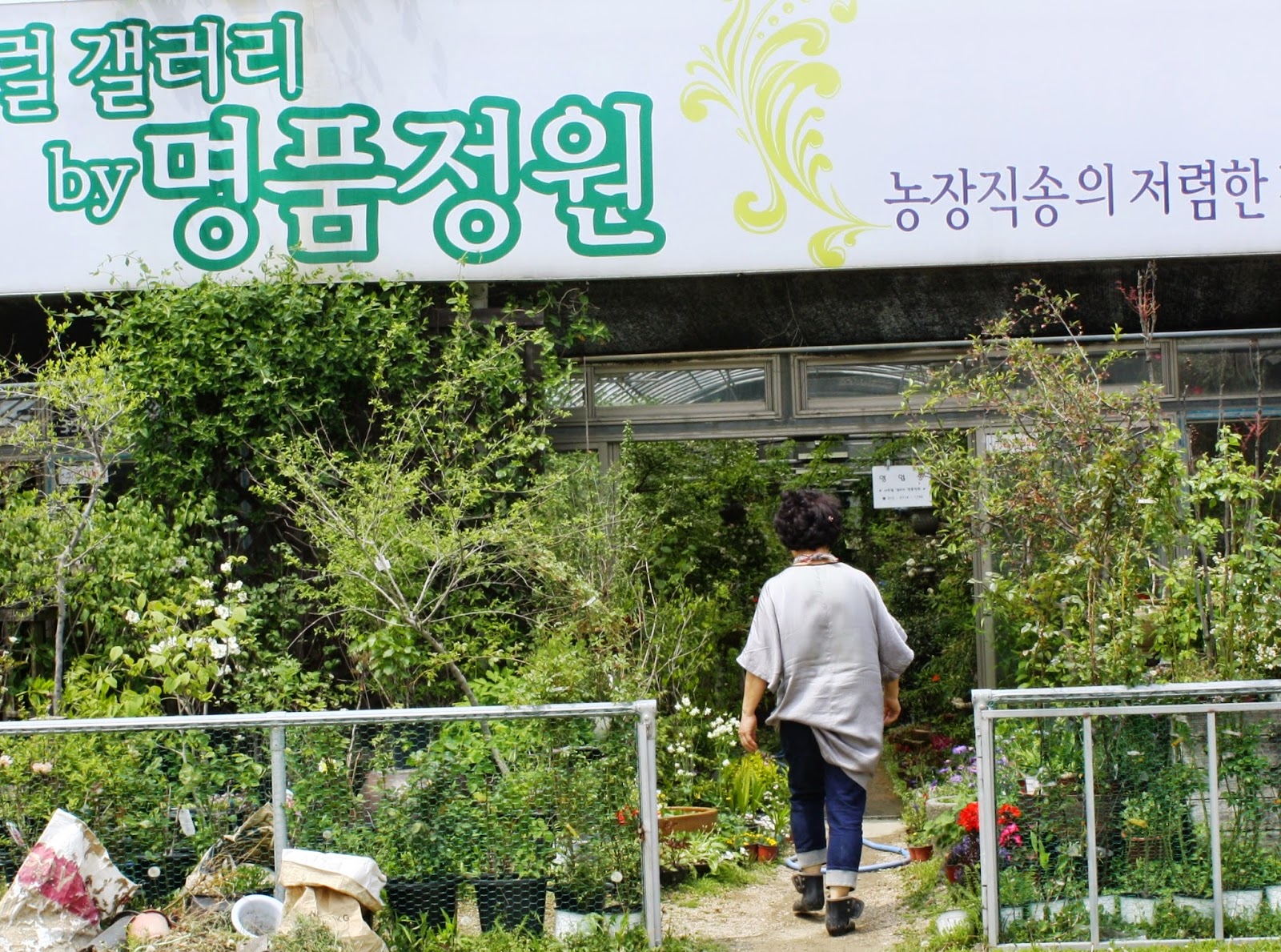 I love my Canon camera but it's not been working well recently and only getting worse.  After querying the local expats groups on Facebook, I found the approximate location of a camera repair shop.  I assume such places have actual names and addresses, but it's just easier for foreigners to discuss locations-by-landmark.  To wit:

So, my beloved TA and I (I'm teaching two classes at the university now - I love it, but it leaves far less time for blogging, as dear readers may have noticed) went to get my laptop and camera repaired in town today. The laptop repair place (local translation: the HP A/S near Shiway's Home Plus) gave your average Korean service (read: rude but competent).  In short, the repair guy lived in a back room that was stuffed floor-to-ceiling with boxes and cigarette smoke and, oddly, a baby car seat; we stood at the doorway (we weren't invited in and there really wasn't room anyway) while he fiddled with my laptop (don't impose any concept of organization or "dust-free zone" on your mental picture here), ignored most of my/Hee Eun's running commentary about what I/we thought was wrong, etc.  He diagnosed a cord problem, blamed me for it (WHY WOULD YOU BLAME THE CUSTOMER TO HER FACE?), and ordered a new cord for me, due in 4 days. Fine.

We next found the camera shop (ok, Hee Eun found the shop - I, of course, automatically scanned for English signs and totally missed the obvious clue of, say, pictures of cameras on the shop's sign, let alone the giant Korean word for camera (pronounced kah-may-rah) above the shop.).

We entered the tiny space, Hee Eun explained my camera's problem (the autofocus has gone from touchy to downright mean), and Camera Guy (whom I initially mistook for an adorable middle-aged ajoshi with bright eyes and rather gel-laden, spiky dyed black hair) interrupted to ask about my camera strap. Well, ok, it's not Regulation Canon Camera Strap, but a soft purple scarf, which is (a) more comfy on my neck, (b) far more pretty and (c) my tiny way of sticking it to the corporate man. He wanted to remove it and sell me a Canon strap; I refused, smiling and trying to pull off the persona of "slightly embarrassed and kind of dumb foreigner."  This might have been a tactical error.

His smiley criticisms continued, flowing right along in Korean.  However, between my status as Very-Observant-Shy-Person-Turned-Social-Psychologist and my actual-though-limited knowledge of Korean and, of course, Hee Eun's tactful translations, I got the message.  To wit:

(1) My camera was dirty - nay, filthy. He insisted we accept beverages (I refused coffee but he gave me a can of Sparkle! McCool! which tastes like carbonated barley vomit - though I may overstate, as Hee Eun rather enjoyed hers) while he cleaned my camera (free! service!).  While smilingly chatting with Hee Eun and joking about how poorly I have cared for my camera, he cleaned it with these highly specialized professional tools: (a) his breath, (b) rubbing alcohol, (c) bits of cotton fluff ripped from a roll, and (wait for it!) (d) a well-used, oily toothbrush (he promised he hadn't used it in his mouth). After each cotton swab, he said "Ha!" and showed us the filth, leaving them in a pile on the counter.

(2) His next smiling stabbing topic was my size.  He freely commented about my weight (Americans eat so much meat!). Hee Eun graciously (and angrily) refused to translate, but I got the gist. Have I mentioned how much I adore my TA?  I must remember to fail her this semester so she can't graduate and I can keep her forever.

In the end, I bought a new lens (it's a more updated version than mine - although he couldn't quite specify HOW it was better - but after his kind discount it was the same price as repairing mine) and I got a filter for it (Ray - thank you for your many gentle nudges) but I refused the hood he also wanted me to buy (to reduce sun spots). I tested my new lens and filter on my shiny clean camera and took 3 pictures. Of him, of course, because I was still trying hard to think of him as a nice guy with a little prejudice against foreigners.  And, of course, I was secretly planning to write this up for my blog.

Now to pay.  Oh - total cost in cash was 100,000 won (about $93) but debit card cost was $150,000 won (surely I heard that wrong?).  Off we went to my bank to get cash, just around the corner. My camera remained behind with him as a requested security (or as a hostage, depending on your current level of cynicism).  As we walked out, he took a phone call and I quickly swept the dirty swabs into my purse. Thus I removed his props for any evening stories about the filthy foreigner and her silly strap/scarf.

We returned and paid; he pressed me to take my remaining fizzy barley beverage which I had strategically "forgotten" on the counter.  Arg. After we left I poured out the beverage on a nearby tree, not wanting to seem rude by leaving it there.

Upon arriving home, I went to transfer today's pictures from my camera to my laptop.  And, inexplicably, saw that some were missing.  Three, to be exact.  Of  him, standing behind the small pile of swabs.

So.  "Customer service" apparently includes removing photos from customers' cameras. Hmmph. That's it.  Game on, Camera Guy.  Game on.
No comments: Links to this post