Living in Community: A Bee Story 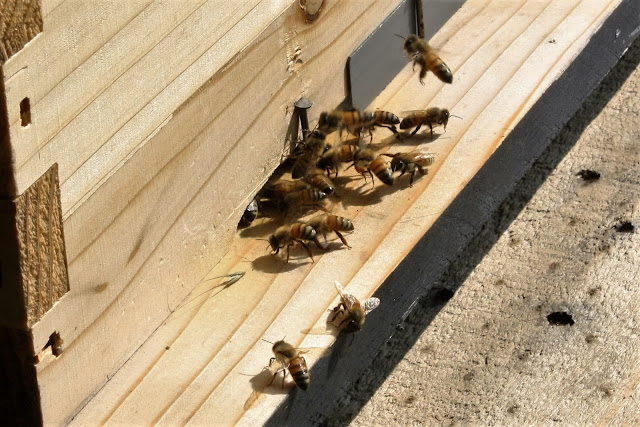 Community gardening has come to mean a great deal more than veggies, flowers, and weed control (important as those are).  Indeed, it has become a significant avenue for learning.  Here is one story that captivated me this summer, beset as it is with gripping thematic elements of sex, violence, and deaths of thousands. 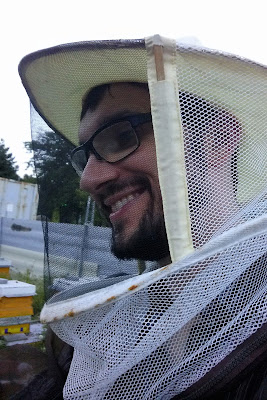 This spring, Joshua, a friend and science teacher at the kids’ international school, asked whether some of his students could start beehiving (of course that's a verb). Well... why not. Just make sure little kids can't jump on the hives or tease the little honey-makers but otherwise, go right ahead. So, his students researched bees and planned their project and ordered two hives.

The materials, virgin queen, and workers soon arrived by mail (yes, the Korean Post Office, like the USPS, will deliver bees) and the students installed them in our community garden and under the campus cell phone tower (it’s science, after all: they planned to study the effects of cell phone waves on hive health).  We (ok, “they” plus me) waited for action.  A couple of days.  And…the hives just didn’t take off: the bees huddled inside, rarely venturing out and apparently making no honey.  This was not good news for the science fair project.  Maybe the hives were too high off the ground? Maybe not enough sun? Maybe not enough flowers?

Oh.  Oops.  After some additional research, the students got a very valuable lesson about the sex-ed idiom regarding "the birds and the bees.”  Dear readers with some life experience will not be surprised that virgin queen bee + female workers does NOT result in baby bees.  And with no baby bees, apparently there is no point in going to work each morning. Thus, the silent hives.

So, what to do.  Can you just order up some attractive boy bees?  Apparently not.  The students could order a non-virgin queen, but the existing bees/queen would likely resist the attempted coup and kill her.  So much for baby bees. Some part of my brain ran secret calculations and said “Aha! I have seen bee hives by Chilpo, a tiny village just north of us, best known for its sandy beaches! Perhaps the Chilpo hive owners can help!”

I, naturally, volunteered to drive as this was a potential adventure not to be missed. Joshua, his colleague John (a Korean-Tanzanian-Kenyan) and three bee students came, along with Elisabeth, who also decided this was not an adventure to be missed (I might possibly have bribed her by saying, “Hey!  There’s a horse! Bring an apple!”).

Happily, someone was at the Hive Place.  Through John's translation, we learned that this place was not, as it appeared, a run-down 1950s-style motel, but... a Beekeeping Cooperative! This was excellent news indeed!

Mr. BeeMan gave us an impromptu tour of the many hives, opening some to show the students what drones look like: big, fuzzy, and a bit dopey (the boy bees, that is, not the girls).


During our tour, BeeMan's colleague brought out some delicious red honey for us to taste (harvested last fall).  And he brought out a jar housing a savage demon: a Giant Asian Hornet, which is rumored to love nothing better than eating honeybees.

After an explanation of the students' sexless hive situation, kind BeeMan offered to either loan or sell a couple of thriving hives with fertile queens, accommodating drones, and eager worker ladies.  The students opted to buy and a few evenings later, we drove the buzzing hives back to campus for installation (sorry, old bees, who were gently released.  May all your days be filled with bright flowers.)

So, after a day or two of resting and orienteering (sorry mom - I didn't get any pictures of their tiny maps and compasses), the new bees began working.  For several weeks I loved seeing them busily bouncing around the garden, shaking the flowers with their joyous humming.  Joshua and I (and Nick) talked endlessly about honey harvesting this fall, strategies for overwintering the bees in cozy luxury, and even expanding the hives next spring. 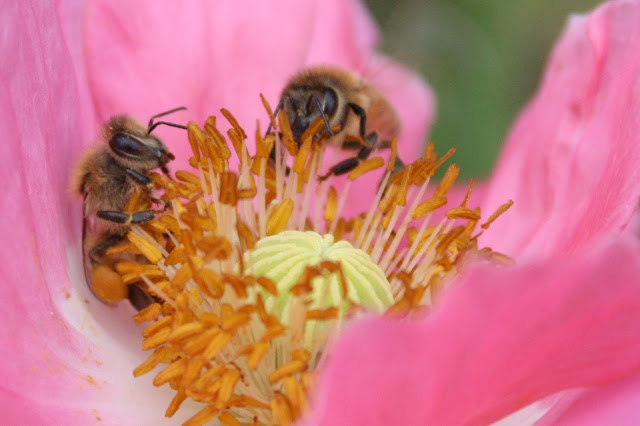 We gradually noticed decreased bee activity.  And then some huge hornets hanging around the hives like our Chicago neighborhood gangs in the 1990s.  Indeed, these were the demonic GAHs.  I had naively assumed that these hornets, despite BeeMan's colleague's Jar of Doom,  were the stuff of fairy tales and urban legend (like the wild boars/warthogs that supposedly roam the woods around campus).  But, alas, I was wrong.  At first, a few GAHs lounged outside the hive entrances, apparently casing the joint; then they began chewing away the wood to enlarge the holes (the better to eat you, my dear).  Finally, they and their homeboys moved in to ruthlessly grab and bite any emerging honeybees. All day long, bees lost their heads either literally (eew) or figuratively (stumbling around aimlessly on the ground).  Then even more GAH gangsters (and a smaller species of hornet) swooped in, picked up the dazed/dead creatures, and buzzed away with their bee booty. (For some great close-up footage of this brutal war, check out this incredible youtube video here).

Various attempts were made to thwart the evil hornets.  Nick wielded a stick, knocking down and stepping on the GAHs.  Pest Removal Experts had been summoned to the high school dorms to remove hornet nests found near the eaves.

As the students we frantically tried to save the bees, we learned a great deal. We learned that bees’ stingers are useless against the hornets’ tough exoskeleton; we also learned that the hornets were quite uninterested in humans and let us approach quite closely without any sign of aggression (that is, they didn't hurt us; we tried to hurt them plenty).  And we learned that honeybees have adapted ways to defend their hives against marauding hornets.  In thermo-balling, honeybees will allow a hornet into their nest and then mob around it, basically heating it to death because the bees can tolerate higher temperatures than hornets.  We learned that in other regions, where the hornets have adapted to higher temperatures, the bees may engage in asphyxio-balling: they cover the legs of a hornet, thus cutting off its air supply (who knew that hornets breathe with their thighs?) and suffocating it.  Indeed, I got to see this latter defense, but it was a group of smaller hornets suffocating a GAH rather than honeybees. 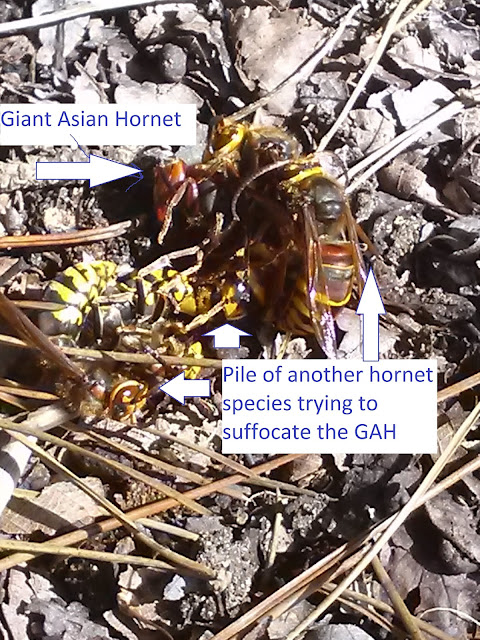 But, despite all the efforts of the bees and humans, the hornets won.  Both hives were dead.  And the science fair project also seemed dead. We had learned some fascinating new things but our spirits were still crushed.  The bad guys had won, and good was overcome.   This is not how the movie was supposed to end.

However, upon reflection (and perhaps a kick in the spiritual pants by friend Tracey), I realized that I had made certain assumptions.  I was rooting for the honeybees (and the students' planned project), so whatever hindered their well-being was The Enemy.  Thus, hornets were evil (and ugly and scary-looking) and were on my list of things to ask God about someday.  But, wait a minute.  I do love to watch an osprey gliding over calm water, snatching up a fish and carrying it home for a family lunch.  Or watching a cat stalk a grasshopper or mouse. So...how are those any different from the hornets and bees?  Nothing except the labels I've assigned. Who knew that beehiving would come with such insights?

And - oh, look now.  Another teacher is wondering if she could possibly have a small chicken coop in the garden next spring.  Chickens.  Hmmm.  This could be a good learning experience.
No comments: Links to this post