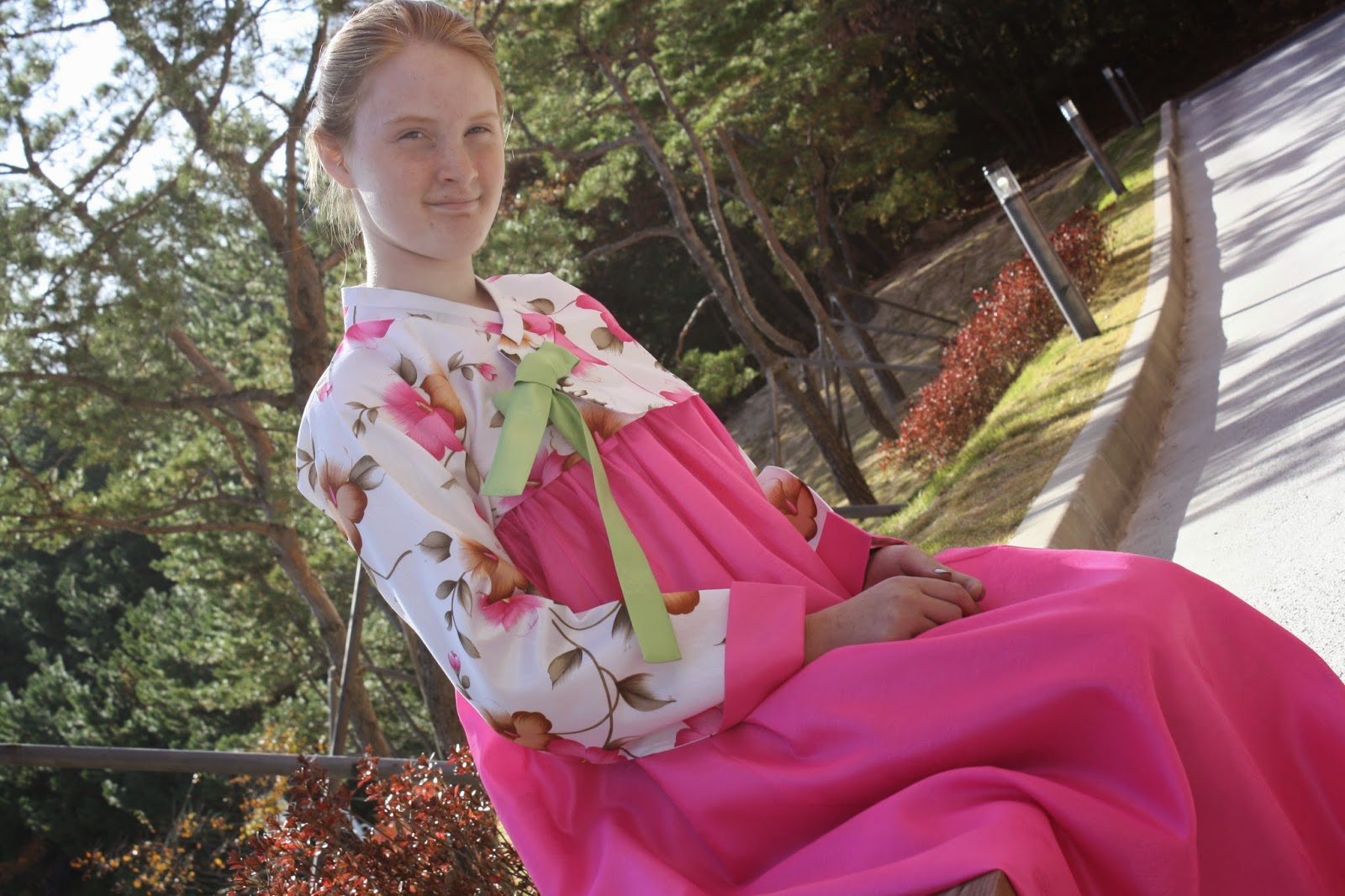 There was a sale on hanboks (traditional Korean clothing) at Joyful Church's thrift shop, and I had been asking for one for a long time. So my mom and I decided to go and get one. When we arrived at the store, it was almost completely empty, except for a few shoppers (hint: a few shoppers). So my mom and I were looking at some hanboks, and found a few to try on that were the right color for someone my age. So we went to the front of the store to the ‘fitting room’. It was not, however, a room: merely a curtain that went up to my neck held up by a wire base. So I awkwardly ducked down while trying to figure out how to actually put a hanbok on. Finally, we thought we got it right, and stepped out to look in the mirror. As we were walking out, a group of ajeemas were walking by the store. They decided to take a look at this weird American girl trying on traditional Korean clothing. Apparently, my mom and I had the whole Hanbok on wrong. The ajeemas all had different ideas on how a Hanbok should fit perfectly. So while I just stood there, keeping my mouth shut while my "girls" were being fussed over by the ajeemas, who were only about up to my neck, wealthy, wearing heavy makeup, in their 50s, and no gray hair.  My mom, had been counting the swarm: about 9, in a space of about an elevator.

Koreans only wear a hanbok about 1 or 2 times a year. So, while being man-handled by others, a woman was figuring out how to tie the knot on the top. Finally, we were done! Nope; we were wrong. So very wrong. The top was apparently not the perfect size for me (not sure if it was too big or small, looked fine to me) so they picked out a different size, and had me try that on. Now start the man-handling again.  One of the ajeemas then told us in her broken English “No brah”. WOW! Do you know how airy the top is? If I bent over to pick something off the floor in a hanbok, then that would be, well, bad. Then one woman showed my mom how to do the traditional hairstyle. NOW we were done! I took the hanbok off, we paid for it (just $30!!  Much better than the normal $200+), and thanked all the ajeemas for giving demonstrations (on me….) of how a hanbok should be fitted
perfectly. On the drive home, my mom and I just laughed and said “No brah!” over and over. This was quite an unexpected experience, even for Korea! 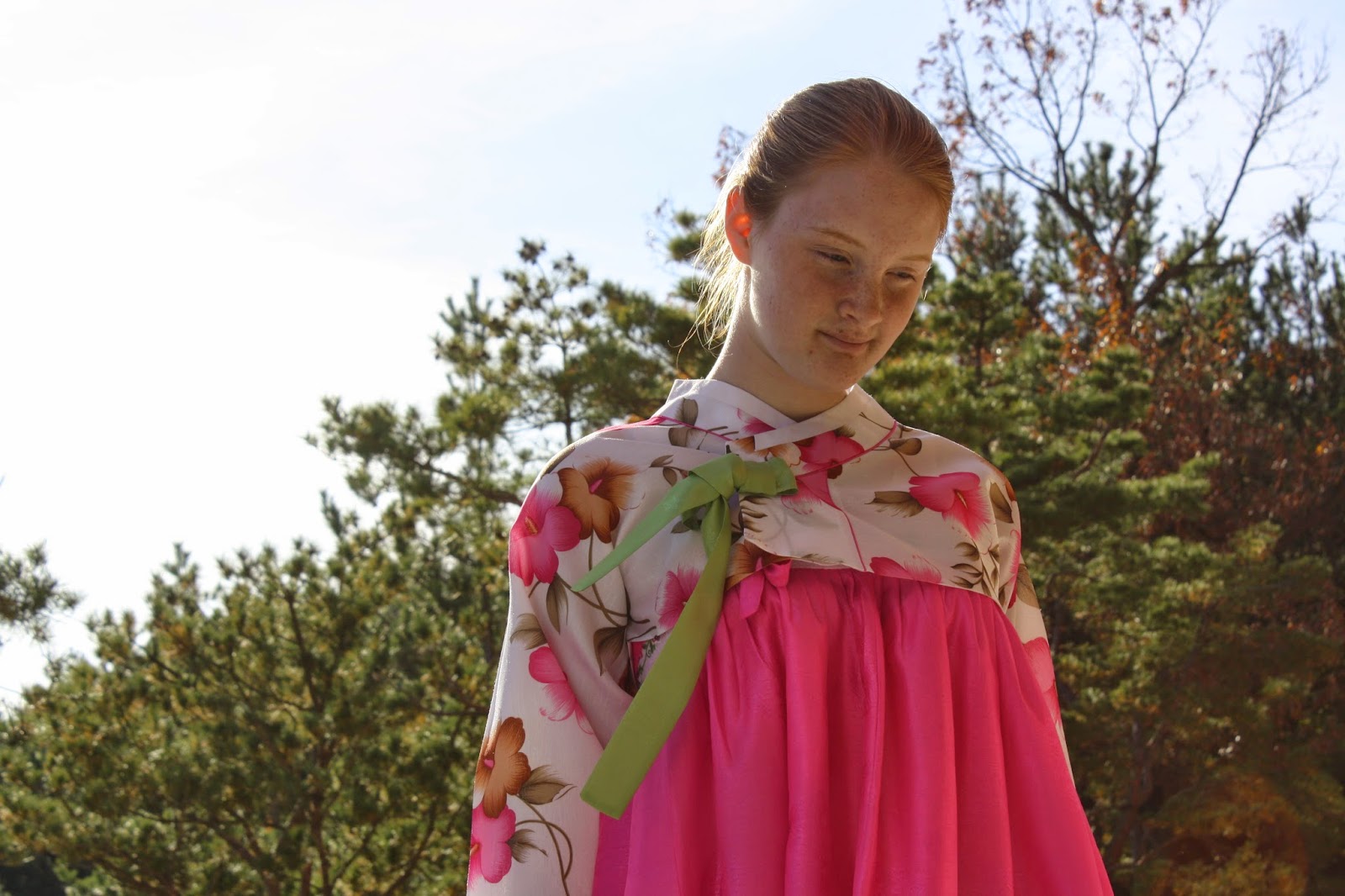 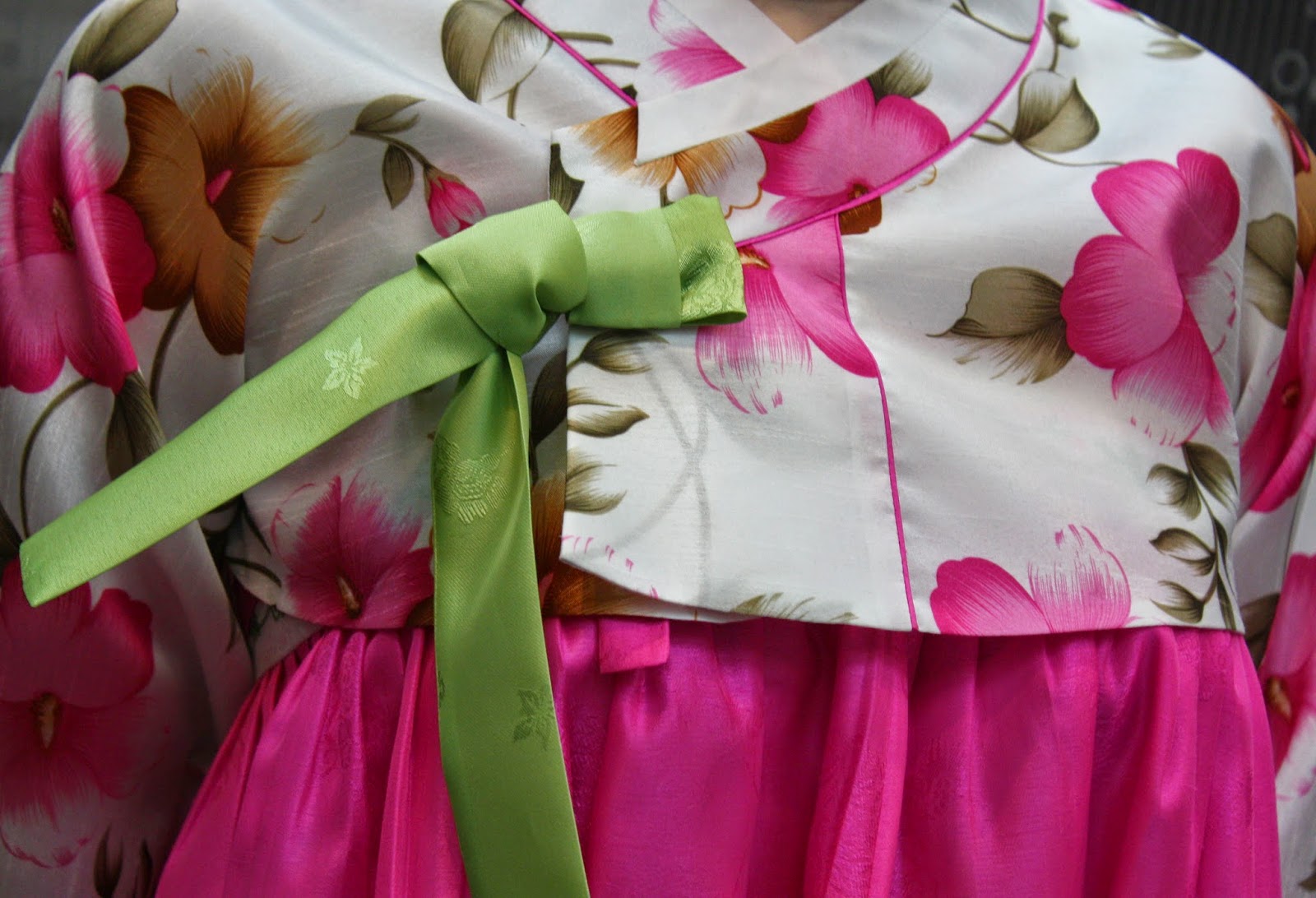 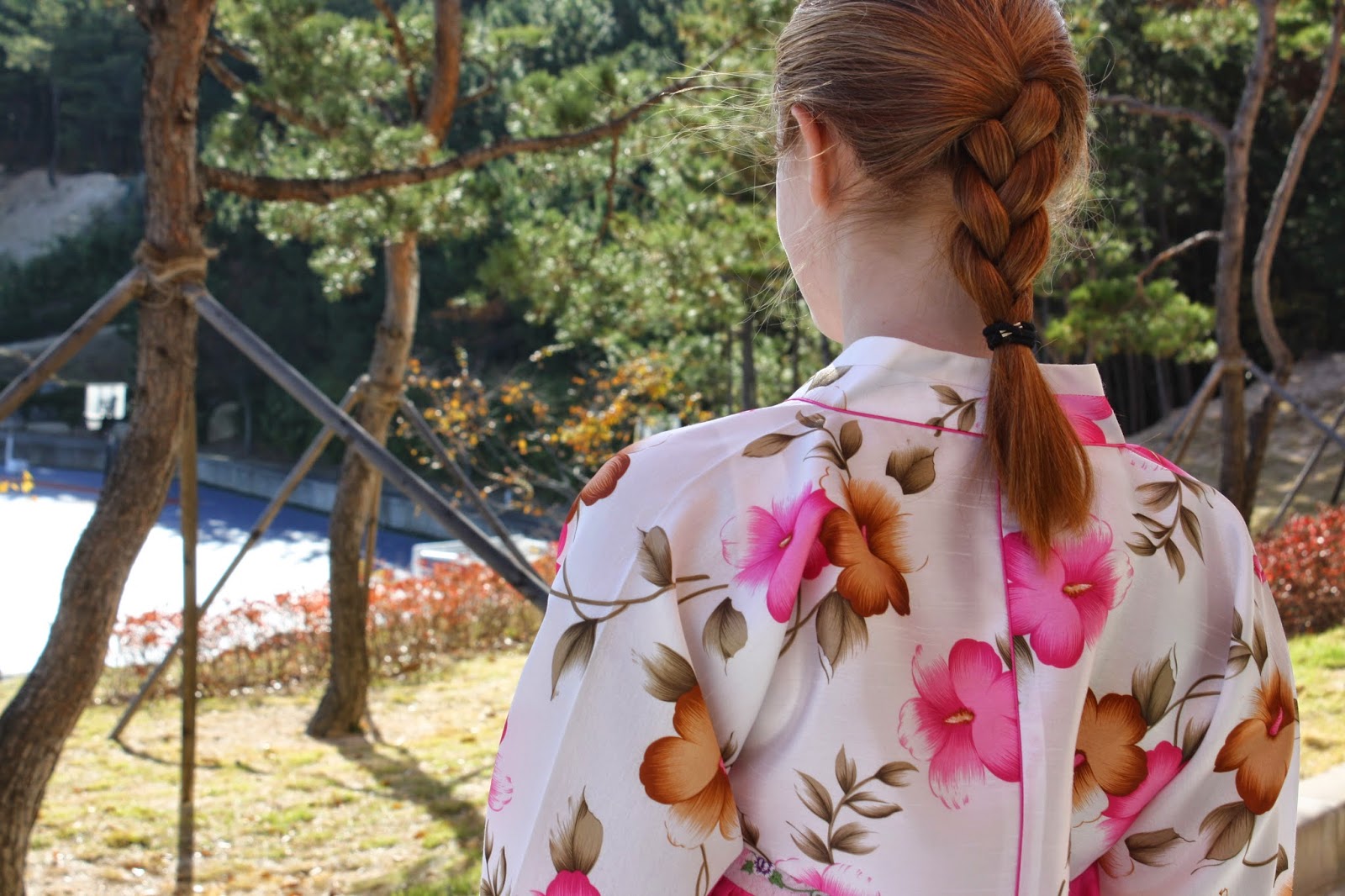 Beasties, Bras, and a Winking Jesus: The Continuing Weirdness of Korea

We've gotten used to a lot in Korea that once seemed weird: the ubiquitous banners; the Hello Kitty and other cartoons used for everything from fashion statements to city mascots; the swastikas that indicate Buddhist temples (not Nazi conclaves). But some things still stand out.  Here are a few from the last couple of weeks.

Pop-Up Monster Garden:  This little open-air garden shop appeared overnight in an empty lot by the grocery store. The variety of displayed mums were really lovely, but some of the props were just inexplicable.

Bra Shopping:  Having lived in Korea for 1.5 years now, I have need of certain lingerie updates. However, the stores in Pohang appear to only sell bras that would fit a girl 10 minutes into puberty.   What I didn't find in my search was anything close to fitting my mature figure (let's just say that the letter A featured very prominently in the racks, with B making a rare appearance.  And that's about the end of the alphabet).  However, what I did find caused me to snort aloud, necessitating a rapid escape before the cruising ajummas found me out.


Wink, Wink: After the kids' orthodontist visit this week, we swung by the dermatologist's office to have David's persistent knee wart frozen off once and for all.  In the waiting room, the plasma TV showed us a range of procedures that could "improve" one's skin, including some mysterious process involving breasts with pixelated nipples.  Well, ok, that not something my teen-aged children are comfy watching.  But to make it much, much worse, the pictures were interspersed with Bible verses (in Korean) and a cartoon of Jesus. Who was winking.  I could not help but think of Monty Python's "wink wink, nudge nudge" routine that makes (inappropriate) innuendos out of everyday speech. Almost as though Cartoon Jesus recognized the irony of being stuck amid slides of pixelated parts. Ah, Korea. 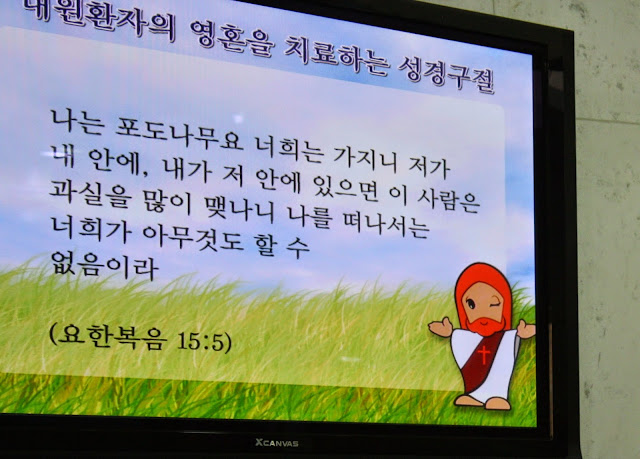 I’m auditing the university's Korean 2 course this semester, along with my Australian friend Tracey (of Centipede Tapping and Horse Poo fame).  We generally hide behind the 10 students from Taiwan, the Philippines, China, Rwanda, Russian, Palestine and Holland.  It's a hard course. And I am not above admitting to an unseemly attitude toward the Chinese students who blithely ace the weekly quizzes despite their compulsive napping and texting during class. I am learning, but besides the teensy amount of Korean that manages to stick, I have also gained two strikingly unoriginal insights into the human condition.

First, brains are tricksy devils. I once owned an agreeable brain that kindly helped me learn without much required by my conscious bits. I thought we were fast friends, my brain and I, but now I realize that it did most of the work while I just reaped the good grades and winning scores in Boggle, Scrabble, and other pivotal life contests. Perhaps I did not thank the brain enough, for our relationship is no more. It's as though the band of happy brain elves has been decimated by petty secessions, leaving behind a huddled mass of downtroddens. What remains seems merely amused by my own floundering efforts to vacuum up new vocabulary or to distinguish between "mah-shee-dah" (tasty) and "maw-shee-dah" (handsome).  When I get called upon to recite aloud or answer questions, I fight the urge to plead for mercy. Yet at the very same time, I dread my young classmates' exchanged glances, the ones that say, "Isn't she cute, trying so hard to learn Korean at her age?"as though they are patting a frail old dog.

To add insult to the brain-rant, I cannot CANNOT follow my teacher's notes.  I believe she has, to put it as nicely as I can, poor board hygiene.  She uses just a small section of the board, writing over and under and through her earlier notes, sometimes adding underlines or new colors while rattling right along in Korean.  I would like to believe the resulting confusion is 95% her fault, but a tiny, irritating brain-elf voice suggests that I underrate my own mental sluggishness. Here is a picture--you be the judge: 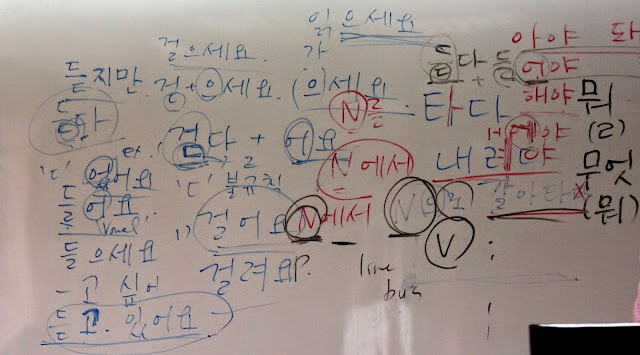 The second unoriginal insight I have gained is this: English is a truly horrible language. (If one day I emerge from a coma not able to speak, please teach me Spanish. Or sign language. Or caveman grunting.)  English, that traitorous shark, likes to adopt any old made-up or foreign word that knocks on its door then bites the new learner with arbitrary usage and spelling rules.  (Brian Regan, one of my favorite comedians, makes much of this fact.) Even for highly-educated, native English speakers, clear communication is hard.  For example, a few weeks ago I was talking with an American friend/professor and got lost in a pretty simple conversation. “Wait," I interrupted, "you said students are stressed during Culture Week because they have a lot of booze??  Isn't this a dry campus?” No, no, he said, a little amused, “Not booze; I said boobs.”  What? WHAT??  In response to my puzzled astonishment, he barely refrained from stamping his foot: “Booths!  BOOTHS!”  Oh.  Of course. Culture week booths. Stupid English.
No comments: Links to this post