When I was a young lady approaching the pivotal pubertal rites of Shaving, Deodorant, and Make-Up, CNN was just being born (shush, you young ones). When my friend’s big sister got on the bus the first day of 8th grade, my mental make-up map was complete: the sophisticated mid-Michigan
14-year-old should wear heavy foundation, a coat of glittering blue shadow, clumpy mascara, and clown-circle blusher.


As an impressionable girl, I embraced her example and commenced to slathering my own face in color and clumps.  Until college, that is, when my beloved Dutch roommate liberated me from the patriarchal American tyranny of oppressive cosmetic consumption.  Thus, as the years have passed, I rarely used make-up and ignored facial fashion follies.  Now, however, 30-some years later, I have two significant challenges to my intentional ignorance: (a) my daughter has reached the triple pubertal gates and (b) we live in the Skin Technology Capital of the Universe.  South Korea is supposedly 10 years ahead of the US in skin care science, and now that my face is getting, um, more experienced, the time had come to introduce my face to facial experts.


Enter my gorgeous TA, RuDa, who agreed to facilitate the introductions.  RuDa recommended going to a Real Make-Up Store rather than dashing into a local convenience store. I reluctantly agreed, assuming we’d just get some basic information. She had other ideas, however.

Lotte Department Store is the home of high-end make-up and clothing in our city.  The white-gloved parking attendants carefully direct customer cars through the garage and manage not to sneer at our sad old van among the common luxury cars.


To say that Lotte is a department store is a bit misleading for my North American readers.  It's more like a very high-end street market, crowded with stalls and goods, only this is shiny and stately.  And, frankly, rather o.v.e.r.w.h.e.l.m.i.n.g. Here I present my Lessons Learned.

(1)   The women who work in these shops show no discomfort with personal space invasion.  I, on the other hand, should have perhaps investigated the wine department prior to entering skin land.

2) Scientifically testing the sensitivity and pH of one’s skin (among other things) are apparently basic pre-requisites to proper product selection.  And, of course, there are apps for those tests: one holds very still while a saleswoman rests her phone on one’s face.  Then one gets to see a very close-up photo of one’s skin, or perhaps it is the back end of a baboon, and we all pretend not to be horrified.


(3)   Having strangers expertly apply products to one’s face while one is very nervous can make for much cringing. For example, a lady used a tiny little brush to apply lipstick; it tickled SO MUCH that I could not repress small snorting noises.  Another lady applied "cushion foundation,” which is a Korean technological wonder of a liquid foundation delivered with a compact powder puff thing.  Except … it felt like she was slapping me with a baby crib mattress, and once that image came to mind, I couldn't stop giggling.  Poor RuDa.

(4)   The sales women were quite kind to my baggy sun-damaged, middle-aged skin, at least to my face (let's just say that RuDa didn't translate everything).  They were also fairly patient with my utter ignorance of their products, how to apply them, and the proper "detached" face expected during a makeover.

5)   Here's one I sure didn't see coming: Under no circumstances should soap be applied to one's face.  EVER.  There are products for cleaning one’s facial skin--and soap is NOT among them. You'd think I had been bathing bunnies in bleach. I shall repent of this skin sin.

6)   One could literally spend all of one’s income on skin care and make-up. Then again, the major ingredients include things like snake venom, placenta, plankton, and gold dust; as one store's slogan had it, "ingredients extracted from nature and enigmatic state" (true THAT). Happily, RuDa knew that the same products we were testing were sold by discount shops on another floor.  I decided I can live without a flashy brand names on my snail goo cleansing foam. 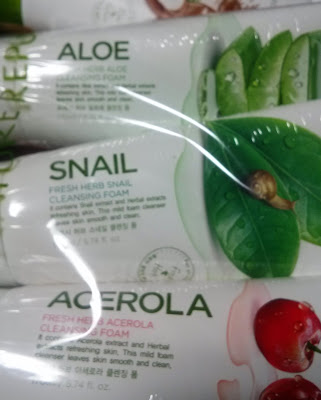 7)   Make-up shopping requires significant training.  I had imagined we'd have light-hearted breezy conversations like “oh, here’s a rack of 5 shades of lipstick – what’s the right color for me?” Ah, no. Store after store had HUNDREDs of shades of lip tint, lip stain, lipstick, lip liner, and who knows what else.  We used testers all over our hands to compare colors and textures.  Then RuDa suggested I select more of a “fall” color rather than something with "too much summer” and I nearly lost my ignorant mind.  I was the dumbest kid in class.

8)   Having good skin is a LOT of work.  Here’s the rough order in which stuff apparently goes onto the Korean adult face (male and female) at least once EVERY SINGLE DAY:
(a)    Make-up remover (as needed)
(b)   Cleanser
(c)    Toner (or, at the very least, another round of cleanser)
(d)   Essence (skin repair stuff)
(e)    Acne lotion (as needed)
(f)     Moisturizer (softens skin and prevents future damage; the fashionable stuff includes bleaching/whitening agents)
(g)    Eye cream (RuDa is ashamed that she hasn’t started using this yet)
(h)   Sunscreen (at least 50 SPF; preferably with more whitening agents)

(9)   Now that the skin is ready, it’s FINALLY time for the make-up – and there is so much used to achieve the popular Korean "naturally dewy" look that I’m sure I’ll never master it:
(i)     Primer (bright purple or green to even skin tones and reduce redness)
(j)     Cushion foundation (slightly lighter than natural skin color)
(k)    Powder
(l)     Blusher
(m)  Eyebrows: powder or pencil plus trimmers, combs, and gel
(n)   Eyes: liner plus 2-3 shades of shadow plus 1-3 layers of mascara
(o)   Lips: primer plus stain/stick/gloss/pencil
(p)   Setting spray (like hairspray for the face)

Well, it's no wonder that my students hate 8:30am classes – they have to get up at 6:30am just to make their faces presentable.  Maybe I'll call up my Dutch friend again for a refresher about the tyranny of cosmetics.
No comments: Links to this post 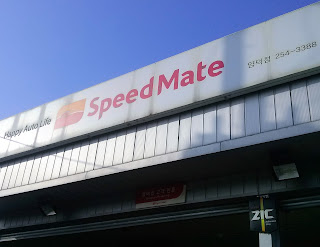 We had 4 errands to run in town this morning.  Easy peasy, right?  But there are always surprises, which makes errands = adventure (or exhaustion, but it's better to stay positive).

To whit: David, Elisabeth and I (they’re only 3 weeks into their 10-week winter break) planned to do 4 errands:

1) Meet an ex-pat to pass along spices from a leaving-Korea ex-pat
2) Get 2 pictures printed.
3) Buy a headset for Nick.
4) Get the van’s broken taillight fixed.

Here is how things actually went:
(1) Spice recipient Kate sort of forgot our meet-up plan so I texted her from our designated meeting spot outside the Fuji film/photo shop.  Moments later, she ran down the street in pink leopard fleece pajamas and plastic shower shoes. Passersby = shocked, but I'd color that adorable.

(2) As the Fuji film/photo studio guy turned on his computer and printer (this is an inexplicable process no matter what time of day I show up), David and I browsed the various displays with some amusement (see photo).  As we did so, a middle-aged man came in, walked directly to the back mirror while chattering aloud to our film guy, and vigorously plucked hairs from around his ears. Eww. Not adorable.

(3) Then to Hi-Mart, our local electronics store.  It appeared open, but as I touched the non-responsive door-opener button, Elisabeth noticed that the employees were having a meeting.  Ok, no big deal, so we headed back to the van.  A be-suited salesman rushed out, however, and invited us inside the store. Upon entering we noted that his eight be-suited coworkers and their boss man abruptly paused their meeting, sitting silently now in the middle of the store, just waiting.  They did not stare at us (that would be rude), but we detected giggling at our poor salesguy’s attempts at English as we browsed the headsets, trailed him past the centrally-seated group to the cash register, and then trailed back again as he escorted us to the door.   Painfully awkward -- for all 13 of us.  I wonder if they laughed as hard as we did.

(4) Finally, to “our” mechanic shop.  When Spiffy Car Guy came out, I pointed to our van’s smashed taillight (the driver at fault for backing into a cement wall? he shall remain nameless).  Car Guy began a speedy Korean monologue, eschewing non-verbal niceties like eye contact to see if we understood anything. FinallyThus, resorting to higher-than-average levels of gesturing and Korean questions (thank you, Elisabeth), we indicated that we’d walk to a nearby coffee shop and he could text me when he was done (no appointment needed!).

About 30 minutes later, Car Guy suddenly appeared at our café table. Oh, um, ok. He monologued for about 2 weeks, and as he windily continued I just got up to ask the coffee shop woman (who had tried out her English when we ordered) if she would please translate for me.  She gamely agreed and we returned to the still-talking Car Guy (sorry kids).  That conversation went something like this:

He: “blah blah blah.” Note that he didn't stop talking during the translation - he just kept right on going.

She (after I gestured for a mid-stream report): “Um, his car? Same part? One part more today afternoon.  Another part Friday.”

She: “You car can drive? Come today afternoon?

Me: “Oh! We can drive our van now?”  She nodded then ran away to hide behind the counter, a mixture of terror and relief and pride on her face. After telling Car Guy we'd be along shortly (thank you, David), he exited Cafe Ancy (yeah, we don't understand the English name either).

We finished our yummy non-coffee drinks and returned to the SpeedMate car shop (no clue about that name, either).  Car Guy had apparently done an eye transplant (not literally - that's gross): he replaced our shattered taillight with one from his own van so we could drive home and come back later once the new taillight came in.  Wow – that is the most awesome and yet rudely awkward customer service I’ve ever had.

This week maybe we'll go really big and try to get our laptops or bikes fixed and maybe even my wedding ring resized.  Then again, maybe I'll stay home and store up more energy before setting out onto the high seas of errand adventures.