I have now lived in Korea for 27.5 months. And, yes, I have gotten used to seeing hordes of ajummas, orange butt-cushions optional, hand-weeding the lawns and fields. And I've gotten used to seeing elderly people collecting boxes to sell at a scrapyard for pennies. And women sweeping with twig brooms and a society of people obsessed with smartphones and selfie-sticks. And I can read the language - not quickly, and usually without understanding many the key words. But we have certainly settled in, well past the exhausting learning curve of living in a new culture.  It feels a lot like home now.

But there are still those little zingers, those situations where, if the planets of sleep and chocolate are not quite properly aligned, one might burst into tears. 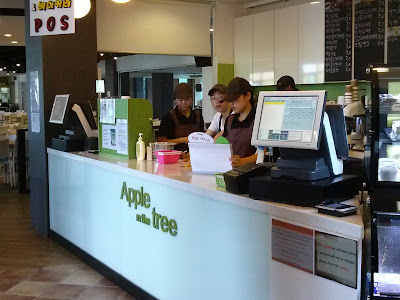 On Monday morning, all I wanted was a lemonade. From a campus cafe with a friendly English name. Where four (!) staff members stood by the counter. But customers apparently have to order using a computer.  I stood, mouth agape as I tried to figure out which "POS" sign above the two computers best matched my lemonade need. (As an American who knows far too much slang, POS does not stand for anything good. The phrase "point of sale" came to me much, much later.) The first one said "bakery POS" and the other said "Something & bakery POS."  Well, ... how about bakery, then?  Nope - I needed the other one. *sigh.* Ok, to the "Something and Bakery POS" sign/computer I went. Where I stared at a screen that someone only half-heartedly translated. 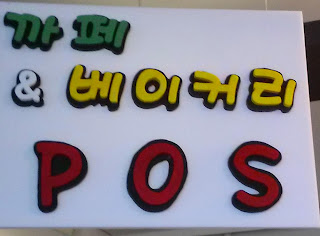 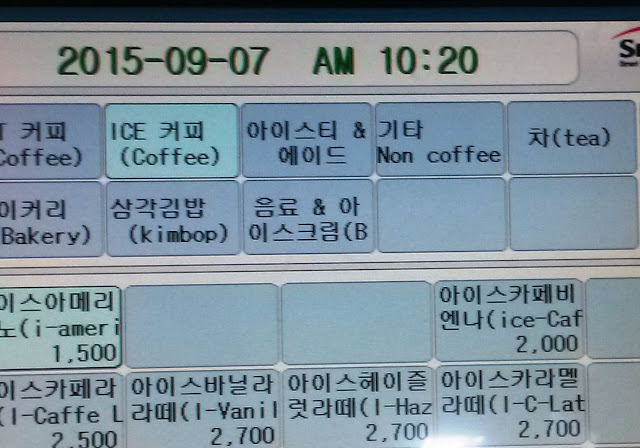 Hmmm.... where does lemonade live?  I picked "non-coffee." Wrong! Back to sounding out words. Ah - I should have picked "아 이 스 티  & 에 이 드."  Ok, after this "ice tea and ade" button I located the lemonade option easily and pressed it.  But now what?  Nothing else is in English and the flashing boxes mean nothing to me. Students are helpful when asked, but they just take over the transaction, even signing the screen for my debit card, understandably just wanting to get on with their day.  So I still don't know how to do this ordering thing. Next time (if there is a next time), I will again have to rely on the kindness of students as I stand stupidly, sounding out words, being the dumb foreigner, wishing again for that feeling of home
4 comments: Links to this post