Stripper Shoes (or, I Told You So)

This is not really my story, but I'm part of it and it makes me laugh so much that I must share it which keeping identities confidential.

A lovely international woman I've met here in Korea, whom we shall call X, is someone who I see as a good friend but I fear she maybe views me more as an aunt or a mom due to our age difference (wow, it's about 20 years, now that I do the math).   Anyway, we enjoy each other's company and like having coffee and watching movies together, etc.  One night she brought over some clothes that she thought Elisabeth might like to have. Indeed: the shirt and sweater were a hit. but I put a stop to the dress shoes. Elisabeth is only 12 and has no occasion to wear 4" stiletto heels, no matter how much she begged about the unlikelihood of finding such nice shoes in her size (they both wear 9.5) and no matter how much X joined the argument to let my poor daughter have these nice shoes.  No, no, nope. And then, in a verbal show of stamping my foot, I might have been a wee bit too blunt when I said to X, "Elisabeth really doesn't need stripper shoes."  I probably hurt X's feelings, but she recovered quickly and mentally justified my response: "Oh, Sherri is kind of old and doesn't really know what "stripper" shoes are!  I wore these nice neutral shoes to a Christian wedding!  Silly middle-aged mother."

A few days later, X advertised her shoes on our city's Facebook Bazaar page, where we buy and sell all kinds of stuff from left-over taco seasoning to rice cookers to mobile phones.  X soon got an interested buyer, and they agreed to meet for the sale.

When two men walked into the meeting place, looking intently at X, she assumed they were her buyers but must have come to get the shoes for a girlfriend.  Jokingly, X asked "Why don't you try them on to see if they fit?" And to her great surprise, one of the men quickly agreed - and declared them to be a perfect fit.  And then mentioned that the shoes would be a wonderful addition to his upcoming drag queen show.

Wow.  So, ok, admittedly I was wrong: they indeed weren't "stripper" shoes.  But, oh, the end of the story does mean I won back some points with X.  Maybe I'm not that old or ignorant after all.   :)
No comments: Links to this post

I have long believed that February is the longest month of the year, dragging out for eons of nostril-freezing weariness. Of course, before moving to Korea I'd only lived in the mid-west (Michigan, Chicago, Iowa), which stubbornly resides in an ice age for half the year. Now, however, I live in a land where winter is just a season - not a malicious force that warrants hand-wringing headlines.

February flew by this year though, because (a) we got no snow this month; (b) Sam (now aged 19) and Nick's parents (now aged "senior discount") came to visit us; and (c) I started teaching at Handong on March 2 and have needed to nap away the panic attacks prep for my two classes.

We had lots of little adventures this month, including an overnight trip to Busan (I'm no longer an airbnb.com virgin!), visiting Bird Park in Gyeongjju (we were covered in pretty birds! which covertly ate our jackets' zipper teeth!), and tried out lots of restaurants (Vietnamese! Japanese! Korean! Indian!).  Sam also got 3 of his wisdom teeth removed, and it is that adventure on which we'll focus here.

Today's question for you, dear reader: Is it cheaper to get one's wisdom teeth taken out in Korea (including the round-trip plane ticket) or in the US?

Maybe we cheated a little by going to two dentists: MIR Dental insisted on a one-week interval after pulling 2 of Sam's teeth on his right side, and that conflicted with his flight back home. So, we went to another dentist with different orthodontial ethics to pull just one tooth on the left side (his 4th wisdom tooth didn't need pulling after all).  I shall not bore you with long descriptions of every visit (many Korean doctors do love follow-up appointments), but here is the price breakdown in US dollars (google was very helpful in researching costs).

But, ok, aren't there risks?  Well, yeah, but that's what I like to call "adventure." You won't get any informed consent or liability forms or insurance forms or much of any information at all about what's going on (maybe Korean-speaking patients get all this, but we did not).  You're not guaranteed that the good doctor has washed his hands or will wear gloves during surgery.  And Korean dentists don't do the whole "laughing gas" sedation route - a shot is enough.  So, depending on your health hysteria level, you might prefer your local American dentist so matter what the expense.

In the end, the financial savings were significant and we don't get into germ frenzies, so Sam went ahead with great success.  The very best part, of course, was the communication barrier.  A Korean nurse, trying hard to use her limited English, told Sam just before the surgery to "close your face."   He decided to close his eyes but keep his mouth open, and that was apparently the point.  You just can't buy cross-cultural humor. :)
7 comments: Links to this post

Oops: When Red Lights Are Not Suggestions

We live on a small university campus on top of a mountain about 2 km from the East Sea (which less-enlightened people might believe is named the Sea of Japan).  Our apartment building is at the tippy-top of the campus and from our 5th-floor apartment we can see the ocean, the neighboring town/suburb on the north side of Pohang (city of about 1/2 million folks), and even the smokestacks from the downtown steel works (eight km south).  It's not a long distance into town, but it takes some skilled driving: across 10 campus speed bumps (oh, how I wish I was exaggerating), down the pine forested mountain, along a twisty two-lane road amid rice fields, and through an industrial park (where a mountain once resided but was dumped into the ocean to make the port).  Then we get to a village (my favorite for beach-walking) and then to the town/suburb of high-rise apartments, restaurants, dozens of coffee shops, and a ba-jillion smart phone shops. 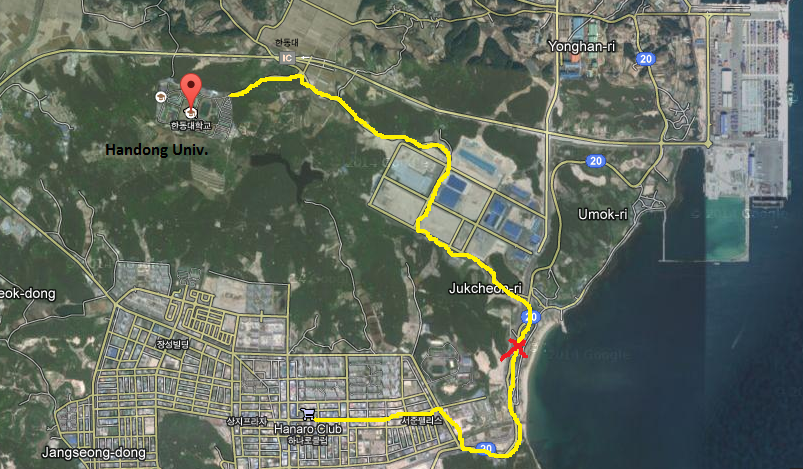 Upon moving here, we noted that on the highway and in the city proper, posted traffic signs and signals were mostly obeyed by private cars (scooters obey no law; buses and taxis have their own law).  But now, as highly-skilled Korean drivers, we know which traffic lights are jokes, which are reasonable suggestions, and which should actually be obeyed.

Until the rules changed today.  After slowing slightly to ensure that no cross traffic was at the familiar 3-way village intersection, I blew through a red light as usual (going only 60kph, compared to at least 80kph by taxis and giant trucks heading to the port). Just after I did so, a police officer (a far, FAR rarer species on Korean roads than American ones) stepped into the road ahead of me and pointed to the side.  Uh oh. I stopped, he spoke in rapid Korean, and I just smiled brightly.  He got a wee bit more aggravated as he gestured in a square-ish fashion. I am not sure why I enjoy playing Dumb American as much as I do, so with a small bit of regret I give him some slack. "License?" I asked, and he nodded.  Whereupon he walked back to his car and chatted with a  young police woman; she stood behind my car and ran my license through what appeared to be an app on her phone then approached my window.

She was adorable.  I could not stop smiling or giggling and would have happily accepted a ticket from her.  Her English was poor (far better than my own Korean, though), but she got the point across as she smiled and stammered.  "Cross-street walk?  Old people?  Red light? You go SHWOOOM!"  I played dumb for a little longer because, well, because I'm evil and wanted to hear her say it all again. So she did and I repeated what she'd said and she brightened even further at our successful communication.  Then she inexplicably stuck her loose fist through my window.  "Yak-soak!" (약속) she repeated, shaking her extended pinky towards me.  I, just having brought David to the doctor (he broke his arm again this week), thought she was saying "pharmacy" (약국) and was very confused (I passed a drugstore? I was on drugs?  what??) until she wiggled her pinky again and said "plo-miss."

Aha!  I pinky-promised a Korean police officer not to run red lights anymore.  Oh my goodness, this is a fantastic place to live.  :)